“Vague, but exciting”.
Those were the words Mike Sendhall, Tim Berners-Lee’s boss, used when he commented on Berner-Lee’s proposal for the  World Wide Web back in 1989.

Well, the celebration of the 20 years old web on Friday at CERN, Geneva/Switzerland was clearly not vague, exciting is a very appropriate word to describe the anniversary. I’ve added some images from one of the most historic events I’ve participated in.

The World Wide Web is 20 years! The most incredible part is to think about did we actually manage before the web?

I went to CERN in Geneva, Switzerland on Friday to be part of the celebration, and to listen to Tim Berners-Lee, the main brain behind the web. The www must have been among the 10 most important innovations from the last century, if not the top. I’m writing an article about it for Mandag Morgen, so I’ll save the good quotes for the article, but I will show you some images I took at the Globe.

Warning – these images are geeky! 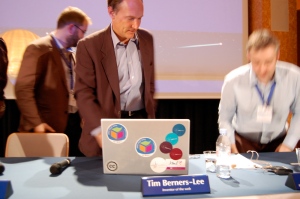 Cool cat Sir Tim Berners-Lee has his laptop ful of stickers, most of them saying "Open Your Data". Important message. 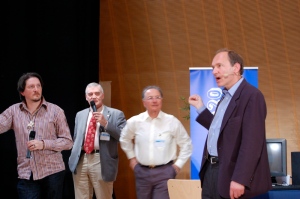 Tim Berners-Lee and the gang. They were the brains behind the start of the World Wide Web, from left Jean-Francois Groff, Robert Cailliau, Ben Segal, Tim Berners-Lee. Here, they were demonstrating the NeXT computer and all of them got very excited.

This is the NeXT computer (forerunner to the Mac), that acted as the world's first web server. 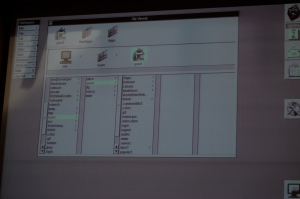 We even got a demonstration of how the desktop of the NeXT machine looked like. 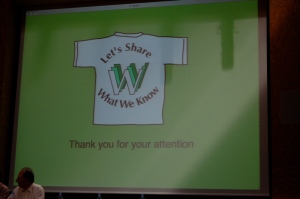 This was the kind of t-shirt the early web people used, back in -89/90. Yes to sharing!

This is the Globe, the beautiful conference centre at CERN.

The inside of the Globe, where the walls are covered by images from the new "Angels and Demons" movie, which is filmed at CERN (release in May).

Image by Bente Kalsnes is licensed under a Creative Commons Attribution-Non-Commercial 3.0 Norway License.
Based on a work at bentekalsnes.wordpress.com.