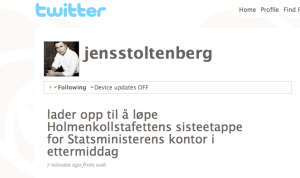 Today, a tweeting Prime Minister made me happy.

Not because of something political he wrote, but because Jens Stoltenberg, the Norwegian Prime Minister was about to go out running, in a public race (Holmenkollenstaffetten). He is part of the team at the Prime Minister’s Office, and he’s running the last leg of the relay race. It also made me happy that he (or his ghost writer?) wrote about this on Twitter.

I do like small pleasures, and this is one of those, let me explain: I think it is fantastic that the Prime Minister of Norway can participate in a public race, that he feels safe enough to do that (I assume he’s running with some guards), just think about all the countries where it would be impossible to do something  similar for security reasons. Even though I disagree with the Labour party and the government on several issues, today he has my full support in the race!

And even though @jensstoltenberg doesn’t have the most exciting and revealing Twitter updates, he is there, trying, that’s a start at least.

Now, back the the article about the European Parliament election that I was suppose to write about this morning.